Skip to content
Redevelop the suburbs of the Italian towns: Street Art

Redevelop the suburbs of the Italian towns 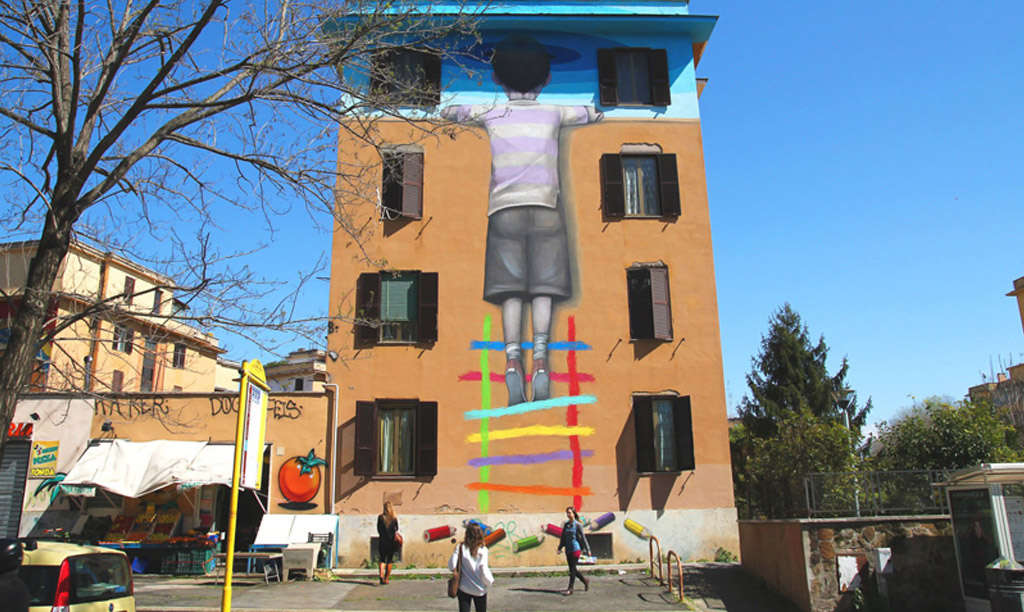 Fight the degradation with art, giving identity to anonymous or residual places. Examples include the districts of Pigneto, San Basilio, Testaccio, and Tor Marancia in Rome, also Barriera di Milano in Turin.

Surreal figures, urban allegories, blow-ups, stylization, as mental as magnetic forms, fantasies that come from the dream-like experience of dreams, sometimes monochrome or rich in colors: each mural embodies a redemption story in the eyes of those that live the neighborhood every day. Experiences, sensations, and new emotions to process, are the nowadays-heritage of the city suburbs such as Turin and Rome.

Barriera di Milano it is a former working-class suburb in Turin, also known for its social problems. In the spring of 2014, it was announced the international call for public art “B.art – Arte in Barriera”, with the aim to redevelop 13 blind façades in private condominiums and public buildings. The winner was the “Habitat” project, conceived by the Italian street artist Millo, with 13 scenes linked by a common thread based on the relationship between man and the urban fabric. Thirteen different interactions of a character with buildings, things, animals and people.

Bart and the Flying Painter:

Tor Marancia, a popular area in Rome that includes the Q. XX Ardeatino neighborhood. Thanks to “Big City Life” project, it has been completely transformed by the works of 20 international artists from 10 different countries, such as the Portuguese Vhils, the French Seth, the American Gaia, and Argentine Jaz. Free of charge plan, it boasts of 20 out-of-scale murals that decorate the facades of 11 private mansions of the neighborhood.