Skip to content
A “Back” vase tale: the artistic ceramics of Nicolò Giuliano

the artistic ceramics of Nicolò Giuliano 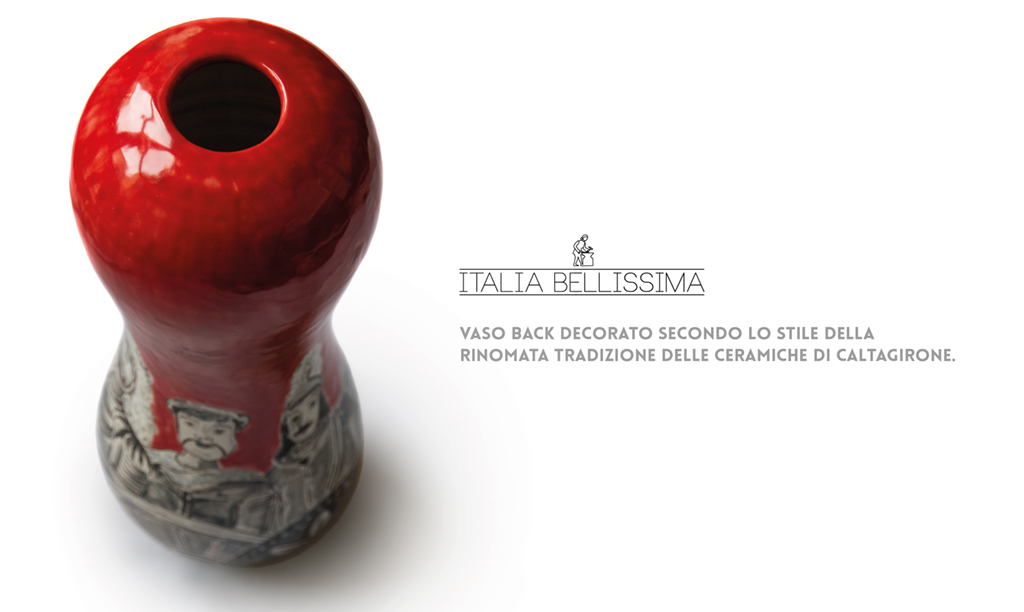 We discuss this with Giuseppe Giuffrida, founder of MUSCÀ, The Museum of Sicilian Cart, which intends to promote the Sicilian cart in Italy and also abroad

We had better analyze the “Back” vase, designed by Andrea Capellino, and decorated by Nicolò Giuliano Ceramiche of Monreale (Palermo) with the popular traditional style of the Caltagirone ceramics. You can admire the decorations recalling the Puppet Theater, an extraordinary example of the Sicilian folklore inscribed in the Representative List of the Intangible Cultural Heritage of Humanity in 2008. We discuss this with Giuseppe Giuffrida, founder of MUSCÀ, The Museum of Sicilian Cart, which intends to promote the Sicilian cart in Italy and also abroad:

“I am passionate of ethno-anthropological tradition of Sicily and, in a special way, my in-depth research is focused on the Sicilian cart. The birth of the ‘Pupo’ is commonly identified in Palermo, thanks to a master of puppets that moved there from Naples in the 1800s. In Palermo, the puppets turned from rag to be armed, to possess an armor and, moved with maneuvering sticks instead of wires or strings, tied to the head and the arm that carries the sword. And there was born the Sicilian ‘Pupo’. Initially, these stories represented the lives of the Saints, such as the legend of St. George and the Dragon, St. Genevieve or Santa Rosalia ones. Then, the main theme became the ‘Orlando Furioso’, an epic-chivalrous poem by Ludovico Ariosto, which was revisited, written in prose and published by Giusto Lodico in 1855. Mr. Lodico, Palermitan too, reworked the ‘Orlando Furioso’ and published it in 42 illustrated pantries, called ‘History of the Paladins of France.’ Due to these, the puppeteers were inspired by the epic-chivalric repertoire of the ‘Opera dei Pupi’, the most successful and represented show ever, even in Catania.

The difference between Palermitan and Catanian ‘Pupo’ is that: in Palermo, it is 90 cm high and has folding legs, while in Catania, it is tall 120/140 cm, including maneuvering sticks, and the legs do not bend. Moreover, in Palermo they are maneuvered behind the scenes, from the lateral sides, while in Catania behind the backdrop, top-down. The choice of have so tall figures is due to have a greater impact on the audience, the poorest social class, who was influenced by these armed ‘Pupi’. They were moved thanks to the puppeteer, which, with the maneuvering sticks, raised or lowered the wire of the ‘Pupo’, imitating the battle sounds effects. There were street performances, i.e. street theatre, as well as in a little more important indoors theater, even if they were narrow and small. These popular theaters, not for drama, have only benches as seats and, seldom, chairs. In this regard, there is a good documentary shot by Mario Soldati in the 50s, in which he interviewed a Palermitan puppeteer and you can see how the ‘Opera dei Pupi’ theater actually got made. The ‘History of the Paladins of France’, in Catania, had a repertoire of about 360 episodes known as ‘The evening’, because almost every day was acted an episode. It was promoted by posters affixed on the façade of the theater, painted in tempera on wrapping paper, with a slip of paper that summarized the night show.

In my opinion, these puppets seem to relate to the Palermitan school, due to the shape of the armor and the helmet. Usually, on the shield and in the chest of the armor, as well as in the helmet, the most important characters possess a coat of arms or an animal that distinguished them. Orlando possessed an eagle, placed on the chest, on the shield and the helmet, while Rinaldo, cousin of Orlando, had a lion as emblem, on the shield and on the chest of the armor. Agolaccio, however, had a plumed hat with a flashy feather aloft. Any passionate spectators could immediately detect the entrance of the characters. About the decoration on the vase, the bearded ‘Pupo’ could remember Orlando, because sometimes he was represented with a slight squint, although he does not have an eagle on his helmet. Although he was the lead of the ‘Orlando Furioso’, and stood out for exuberance and strength, Orlando was often represented as the dumbest of the Paladins of France, unlike the smart Rinaldo. Orlando was usually represented with a red cloak and crest, color already identified by Ariosto but appellant in ethno-anthropological Sicilian tradition, as well as in the Catanese cart. As mentioned above, the ‘History of the Paladins of France’ was born thanks to those illustrated booklet, whose battles, in the various episodes, were grayscale images. So, probably, the grayscale decorations painted on the vase intend to pay a tribute to this”.